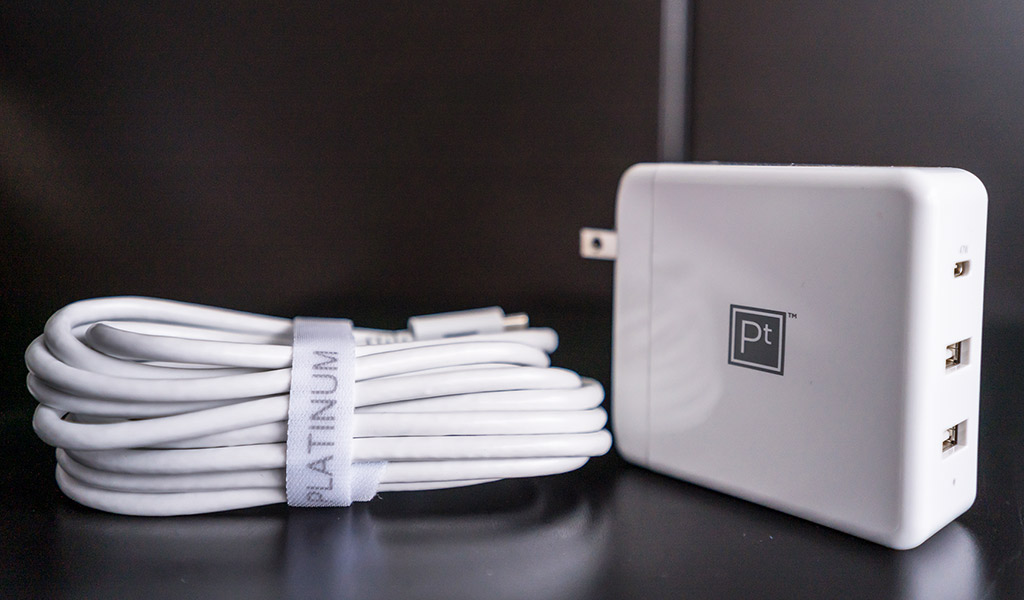 The Platinum 3-Pot aims to prove that having a powerful and adaptable wall charger for more than one device is not only handy, but also often necessary.

Chargers are hardly exciting products because they serve a singular purpose. You only really care about them when you need them, though youre also keen not to lose them. For those reasons, they are perhaps the most important accessories in your hands.

So, what makes the Platinum 3-Pot wall charger any different? Its designed to either complement or outright replace your existing charger. If possible, it could replace a few of them at the same time.

The reason for that is because its equipped with three ports: one USB-C and two USB-A. The USB-C port is capable of 47W output, while the other two ports output 5W each at 2.4Amps. The idea is that you can charge three devices simultaneously, negating the need to plug three adapters into wall outlets.

The charger itself is a typical brick, and very similar in shape and size to a MacBook laptop adapter. It is noticeably weighty at 192 grams, putting it above most smartphones on the market. The included USB-C cable is also pretty hefty at 109 grams, with an 8-ft. length to boot. The prongs are thick and sturdy, flipping back into the body to reduce the footprint.

Put them together and they do combine for a relatively heavy load. The good news is that the cable is thicker and tougher than your average USB-C cable, making it a more rugged alternative to the standard cables that often come with devices.

This charging combination is compatible with just about anything you can plug into it. Whether its a laptop, smartphone, tablet, smartwatch, activity tracker, or whatever other gadget using USB, its simple plug and charge. 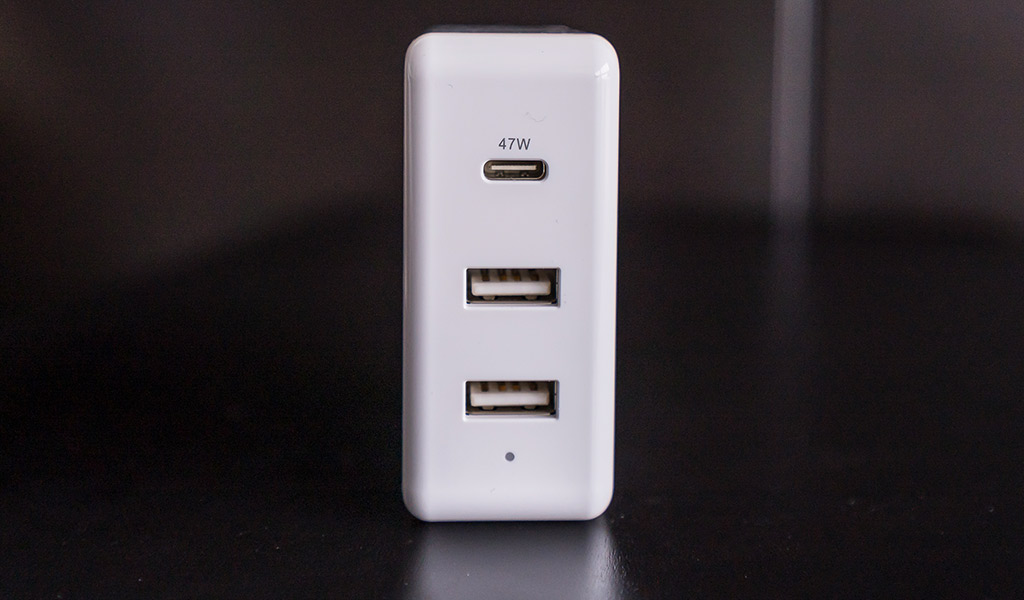 Charging more than once

I used the Platinum 3-Pot with just about any device I could find. USB-C is growing quickly as a standard port, so there were times where I wished there was more than one. For example, I plugged it into a MacBook Pro, and then used the laptops additional port to charge a smartphone.

Anytime I had the opportunity to plug in through one of the USB-A ports, I took it. Those ports are not fast charging, though. The Platinum 3-Pot doesnt speed things up any more than another charger would because most of the output comes from the USB-C port. Its also important to note that not all devices can handle that kind of wattage, so even if you are using a USB-C adapter, you may not reap the benefits.

There may also be certain limits related to the cable. For instance, some smartphones can only charge really fast when you plug in the dedicated cable that came with them. I tried the Platinum chargers cable with a OnePlus phone, but never quite got the same fast charge that its own adapter and cable could manage.

You may encounter other cases like that, but for the most part, the Platinum 3-Pot will be an upgrade or replacement for whatever you were already using. I personally had no issue with the speed I was getting when charging devices through the USB-A ports. Being able to plug in multiple devices is more than a time-saver, its a major space saver. 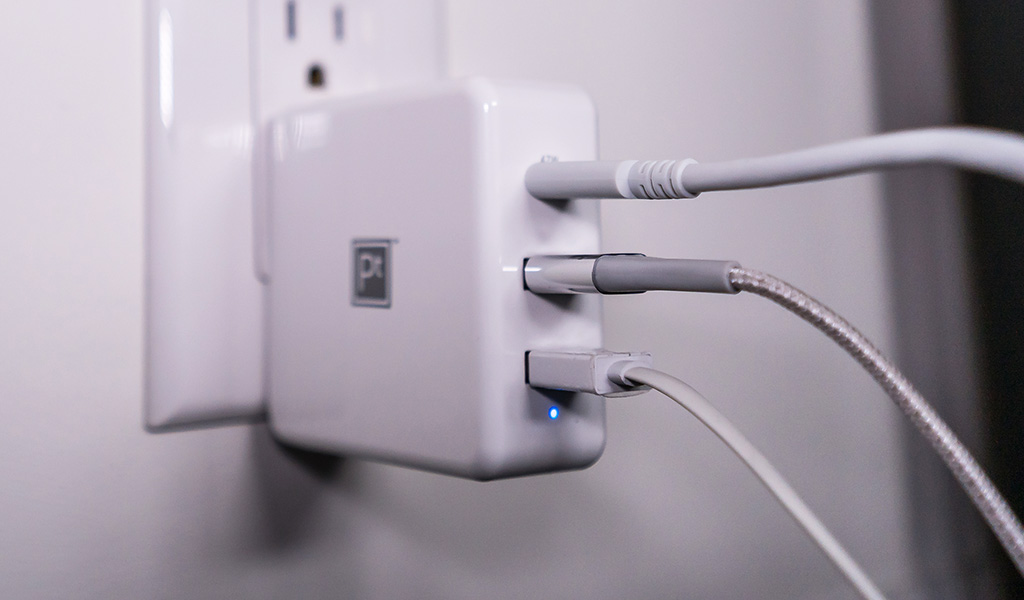 The 47W of power coming from the USB-C port may not match what every laptop charger can do. If, for instance, your laptop draws in power greater than that, then it will still charge, except at a slower rate than normal. If your laptop charger indicates a 45W charge (which is common), then you will get the same performance here.

In most cases, a smartphones fast charge capability will work with the Platinum 3-Pot. Even devices that arent phones have some form of fast charging, like true wireless earbuds or tablets, so the advantages are numerous once you hook everything up.

The thing I liked most was that the brick doesnt have a second cord plugging into the wall. Many laptop chargers have bricks with cables on either end, adding to the overall clutter. Sure, all that cabling means you can plug in from a further distance, but this one is capable of being in close quarters or further away.

At first, I thought the 8-ft. cable was a bit excessive, but it makes sense once you deploy it. The charger can still be useful even when the wall outlet is further away. I know I mentioned this already, but if only it had a second USB-C port. Ive been a fan of USB-C since I first saw it, and its rising ubiquity is a great sign. If you want to take advantage of the other USB-A ports, get an adapter like I did. 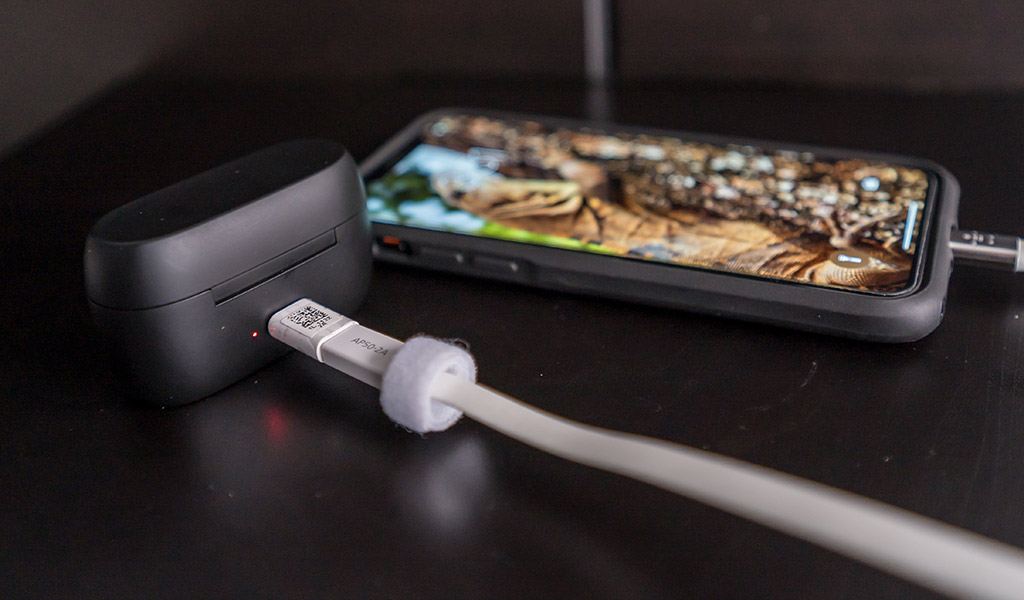 Travelling with the Platinum 3-Pot

When I travel, I prefer to focus on the cables rather than the charger itself. The reason why is because its so much more economical when it comes to ensuring compatibility. That will be less of an issue moving forward when USB-C becomes an industry standard for virtually every electronic device.

While this brick has some weight to it, its a must for travel. It can handle voltages in other countries (though you may need an adapter for the plug itself), making it a handy tool. If you wanted to cannibalize your laptop and smartphone charger into one unit on a trip, this is one way to do it.

A dead charger is among the most frustrating things you can experience because you realize it at the most inopportune time. Forgetting one charger amongst a group you were supposed to take with you is another. The Platinum 3-Pot solves both of those at once. It is equally robust, rugged and refined, and one I would recommend for multi-device charging.

The Platinum 3-Pot is available now.