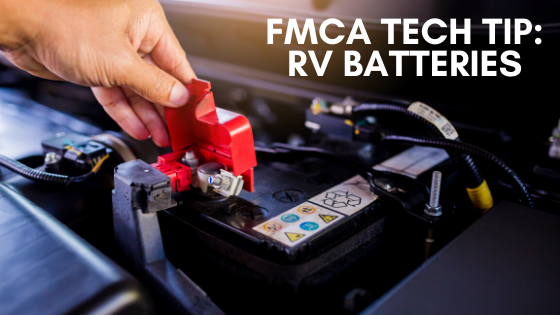 Our friends at FMCA are breaking down the different types of batteries for an RV. Check them out below.

Options include lead-acid and lithium-ion, as well as a choice between 6-volt and 12-volt. The 12-volt-DC electrical system is one of the primary lifelines of an RV. The source of that power can involve some combination of generator, shore power, solar energy, and batteries, as well as the converter and the inverter/charger. Here, our focus is batteries, and the possible choices. 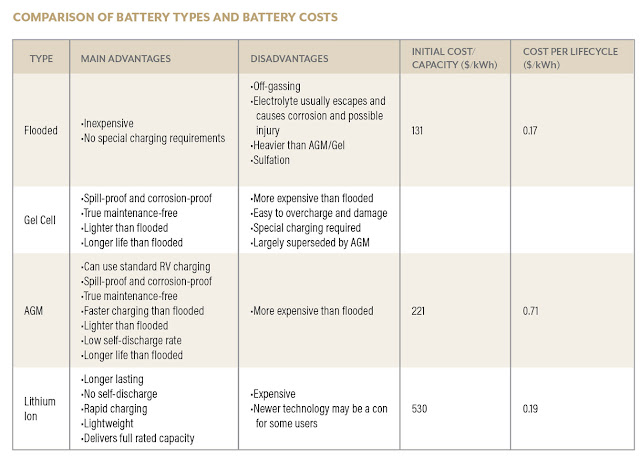 If your RV usually is connected to grid power, you aren’t as dependent on the house battery bank; the primary concerns are proper battery maintenance and avoiding overcharging. However, when you are boondocking, or dry camping, you rely heavily on the batteries’ ability to deliver a steady supply of 12-volt power. Historically, the go-to battery for RV use has been the flooded lead-acid battery, which is the oldest type of rechargeable battery, invented in 1859. These are the batteries in automobiles, but for RV house use they have larger plates than “starting” batteries, to facilitate deep cycling. While lead-acid batteries haven’t changed much in more than 100 years, newer technologies have introduced other lead-acid batteries to the market, including gel-cells and absorbed glass mat (AGM); both are of a type called valve-regulated lead-acid (VRLA). And recently, lithium-ion (Li-ion or Li+) technology was introduced. So, which type of battery should you choose for your home on wheels? Also, should you buy 6-volt or 12-volt? Each battery type has its advantages, disadvantages, price range, and requirements. For instance, there are different charging requirements that your existing converter or inverter/charger may not be able to accommodate. So, while you can keep the batteries charged, you run the risk of overcharging or damaging them, or reducing the batteries’ life. 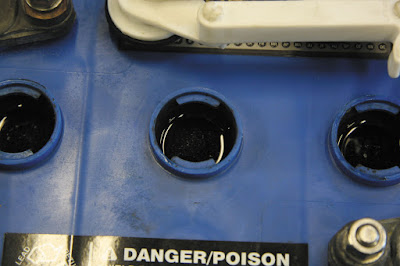 These are still the most common and inexpensive batteries for RV use. Although they can be constructed differently, all batteries of this type consist of lead plates (electrodes) suspended in electrolyte, which is water-based sulphuric acid. Almost all RVs currently in use can accommodate flooded batteries without modification to the charging system. An overview of flooded batteries: *They are available in serviceable or maintenance-free versions. The only difference is that the latter lack caps that allow access to the electrolyte. For serviceable batteries, the electrolyte must be monitored periodically for level and condition. *While all batteries should be kept clean, flooded batteries require regular cleaning of the terminals, posts, straps, and surrounding area to remove corrosive battery acid, which builds up regularly because of the water-based acid. Such batteries also release hydrogen, especially while being charged. *Because the acid is suspended in water, there is a risk of acid damage or injury if a flooded battery leaks, falls over, gets cracked, or is otherwise damaged. *Discharging a deep-cycle flooded battery to less than 50 percent charge can limit battery life. So, such batteries are capable of only about half of their listed amp-hour capacity. *Sulfation — lead sulfate crystals settling on the battery plates — occurs in flooded cells. Reversible sulfation is a normal part of the chemical reaction, but permanent sulfation reduces battery efficiency, as well as life and charge capability. Excessive sulfation is the primary cause of premature failure of flooded lead-acid batteries. 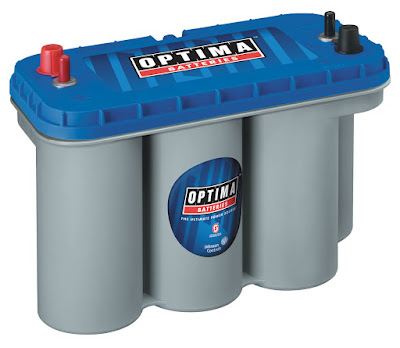 These batteries go one step further than gel by absorbing the electrolyte into fine fiberglass pads. The pads can be flat, resulting in standard lead-acid battery size and shape, or they can be rolled into cylinders for a smaller battery footprint. Since the electrolyte of AGM batteries is fully absorbed into mats, the batteries are leak-proof and spill-proof, short of major damage to the battery casing. AGM batteries are not subject to the same charging restrictions as gel batteries, so, generally, standard RV charging equipment can be used without modification. Some high-end converters and inverter/chargers have charge settings for AGM batteries, which have charging curves that differ slightly from those of flooded batteries. As with gel batteries, external corrosion is nonexistent with AGM batteries. In addition, gel and AGM batteries are much less prone to sulfation. And internal resistance is much lower in AGM batteries than in flooded cells, so AGM charging time is much shorter.

Lithium-Ion
Although lithium-ion (Li-ion or Li+) battery technology has been around since the 1980s, historically it has been used in smaller consumer devices such as cell phones and laptop computers. With recent advances, the batteries now can work in larger applications such as RVs and standby power plants. They are a marked departure from their lead-acid counterparts. Comparing the energy density between lithium-ion and lead-acid batteries reveals stark differences. A lead-acid battery can store about 25 watt-hours per kilogram of battery, whereas a lithium-ion battery can store 100 to 265 watt-hours per kilogram. This results in a 50 percent to 70 percent weight savings per amp-hour over a lead-acid battery of the same size. Lithium-ion batteries also have absolutely no discharge memory, so they are almost 100 percent efficient and can be recharged from completely dead in as little as one hour, depending on the charging technology and battery. This means they can deliver their full rated capacity. The built-in electronics automatically regulate the charging, and chargers designed specifically for lithium-ion batteries are highly recommended. Using a “general” charger could reduce the battery life, but this may not be noticeable by the user. It is important to understand the administrative functions that a particular battery management system controls, as not all battery circuitry is the same. Lithium-ion batteries require an onboard control circuit; therefore, the cost compared to lead-acid batteries is very high. However, such costs are defrayed when considering battery life, number of charges possible, and the energy output. (Thanks to Avanti Lalwani of Briter Products for assisting with lithium-ion specifics.) 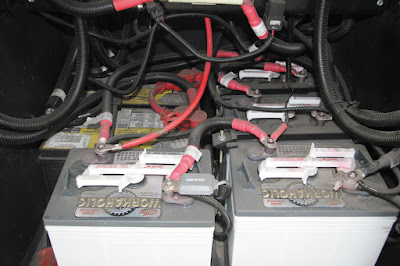 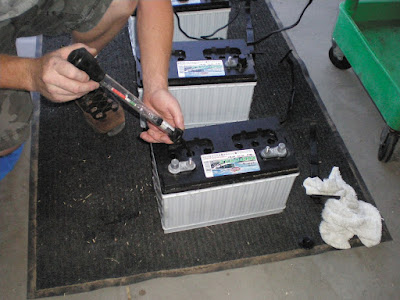 *If you do a lot of boondocking but don’t want to spend the money on lithium-ion batteries, install as many batteries as you can make room for in your RV. I also recommend using 6-volt batteries. While you will have space for only half the number of batteries in terms of equivalent voltage, you will gain more than twice the current capacity. *If money is not a concern, go with lithium-ion. You will have more battery per square foot, and much more current capacity, as these batteries are virtually 100 percent efficient. You also will be able to charge your battery bank very quickly, which is important when dry camping. And you will save significant weight, if this is important to you. Lithium-ion is the battery technology of the future, and I predict the price of these batteries may drop in the next few years. However, the high cost is the only downside, and that is largely offset by their high efficiency and long life. The question of which type of RV batteries to use remains a topic of debate in RV circles. RVers should collect information such as that provided in this article and consider their individual needs in order to make an educated decision.