A fully virtual draft, plenty of Love and Ute prospects lined up for selection are just a few reasons to watch the 2020 NFL draft 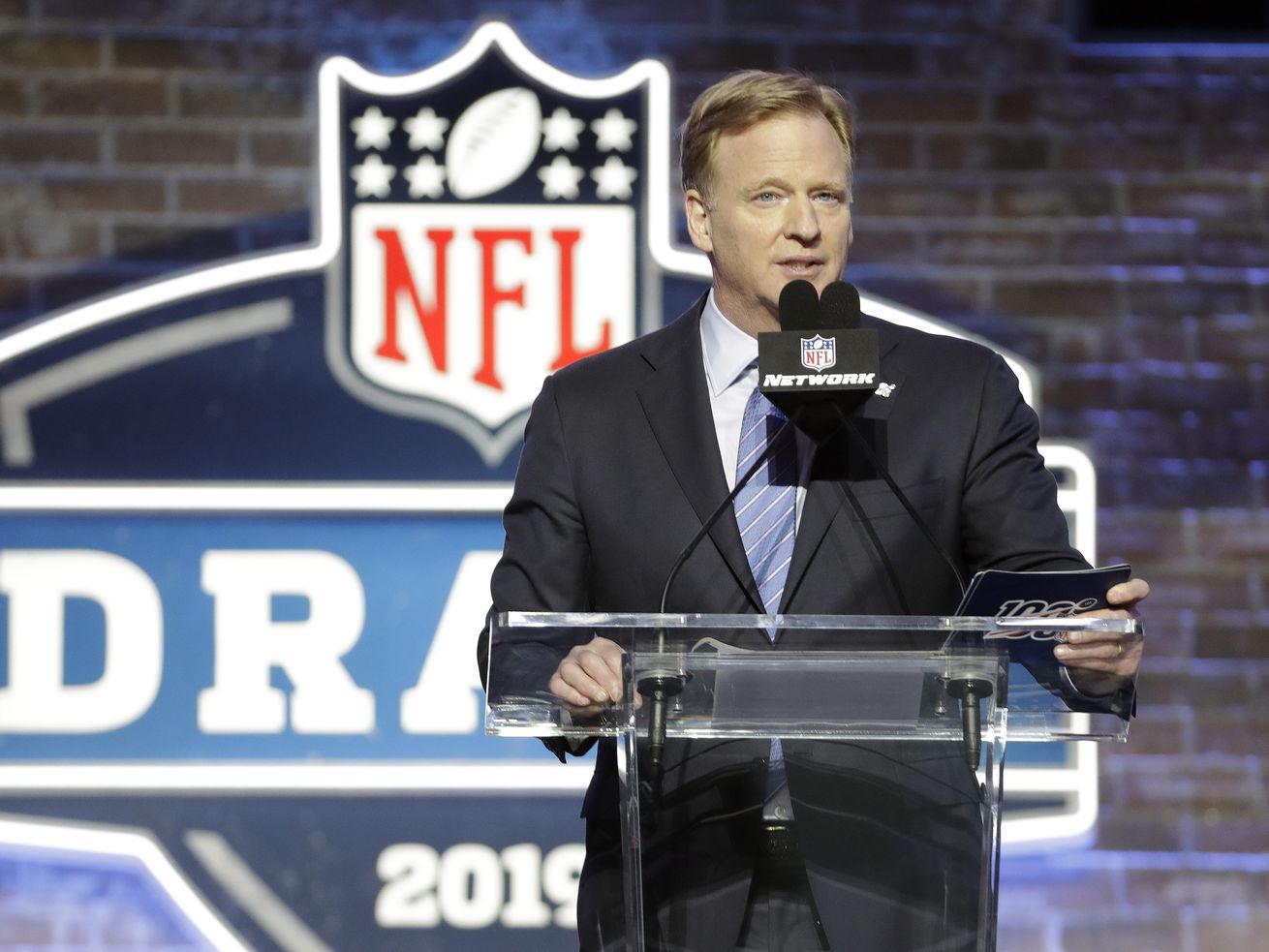 In this April 25, 2019, file photo, NFL Commissioner Roger Goodell speaks ahead of the first round at the NFL football draft in Nashville, Tenn. Goodell will announce draft picks from his basement this year, with club and league facilities closed indefinitely because of the COVID-19 pandemic. | Associated Press

SALT LAKE CITY — It’s a storyline that sounds like it belongs in the same vein as Chris Farley’s famous “I live in a van down by the river” “Saturday Night Live” sketch.

The Detroit Lions will have an IT guy stationed in a Winnebago in the driveway outside general manager Bob Quinn’s house during the 2020 NFL draft, Quinn told ESPN’s “NFL Live” earlier this week. “I’m not sure my neighborhood association is going to like that, but that’s life,” Quinn said.

And yet, it’s part of the reality the league faces as it makes its annual draft fully virtual amid the COVID-19 pandemic. Instead of the bright lights and the big stage of the draft — which was scheduled to be held in Las Vegas — video meetings and conference calls will take over with stay-at-home orders in place for this year’s event.

“Many of us on (this conference call) have done fantasy drafts in our basements. The commissioner announcing picks in his basement harkens back to those moments.” — NFL’s Peter O’Reilly

Unlike sporting events where fans fill the stands and workers run the venues, the draft is able to go on amid the pandemic, as NFL Executive Vice President of Club Business & League Events Peter O’Reilly explained, because “ultimately it’s one big conference call, even in a normal year.”

Watching to see if technical issues play a role is just one of many reasons for Utahns to turn on their televisions for the 2020 NFL draft, which runs Thursday through Saturday. For Aggie and Ute fans, there are a litany of compelling prospects who are expected to hear their names called.

NFL Commissioner Roger Goodell will announce first-round draft picks from his basement, and all team personnel are homebound with club and league facilities closed indefinitely.

O’Reilly laid out the logistical redundancies that will be in place for the draft to run as smoothly as possible, including an open conference call where teams come off mute to make selections, a collaboration with Microsoft Teams to connect personnel around the league and email exchanges as another fallback.

In addition, three separate team representatives will be able to submit a pick, and if a team is experiencing technical issues, the player personnel department will be in position to stop the clock.

Consider this the NFL’s own version of a fantasy draft, except the picks are real and the contracts are binding.

“Many of us on (this conference call) have done fantasy drafts in our basements. The commissioner announcing picks in his basement harkens back to those moments,” O’Reilly said.

It’s only been three years since Utah had a program-high eight Utes selected in the 2017 NFL draft, yet this year’s group of draft prospects from the university looks like it could tie or surpass that mark.

Cornerback Jaylon Johnson, who left Utah following his junior season, leads the defense-heavy Utes class. The 6-foot, 193-pound Johnson is a possible Day 1 guy and has projected as high as even midway through the first round.

Minnesota is the most popular pick among national draft experts if Johnson ultimately lands in the first round, while Pro Football Network’s Tony Pauline said teams like Las Vegas, Seattle and Jacksonville are also high on the shutdown corner.

“Johnson is rock solid on tape and he has the tools to fit perfectly in the Vikings’ scheme,” NFL Network’s Daniel Jeremiah wrote in his latest mock draft, where he had Minnesota taking the former Ute with the No. 22 pick. The Vikings also have the No. 25 pick in the first round.

There’s a solid chance the draft’s second day, when the second and third rounds take place, will be kind to the Utes. In his final rankings of the top 300 prospects in this year’s draft, ESPN’s Mel Kiper Jr. has Johnson No. 44, running back Zack Moss No. 50 and defensive end Bradlee Anae No. 89.

While Utah is expected to deliver the bulk of players taken from the state, Utah State has the local — quarterback Jordan Love — who could go off the board first. Love is seen as a first-round prospect, while perhaps slipping into the second round if teams prefer to wait on quarterbacks after guys like LSU’s Joe Burrow, Alabama’s Tua Tagovailoa and Oregon’s Justin Herbert go off the board.

One of the more interesting scenarios for the 6-foot-4, 224-pound Love includes the possibility of New Orleans selecting him at No. 24 in the first round to compete for replacing 41-year-old Drew Brees when he retires. Right now, the Saints’ backup going into the 2020 season is former BYU quarterback Taysom Hill, who’s excelled as a jack-of-all-trades in New Orleans.

“Jordan Love, who I would love to see Sean Payton get a chance to develop and work with, with all of his talent, would you take him there (at 24) or would you try and make a run at the Super Bowl this year? That would be a fascinating dilemma for them there,” Jeremiah said during a conference call last week.

Or what about Love to the Raiders? Kiper predicted that in his latest mock draft — he had the team taking Love at No. 19, and the Raiders also have the No. 12 pick — which would be an intriguing option locally with the organization moving to Las Vegas during this offseason.

“It was just a hunch,” Kiper said of having Love picked by the Raiders, where Jon Gruden is head coach and where the ESPN analyst admits there are mixed reviews on Gruden’s views toward young quarterbacks. “To me, he always seems frustrated he wasn’t hand-picking a quarterback. I don’t know how he feels about Jordan Love. Love can spin it, though. His arm strength is excellent.”

Other locals who could be drafted

Utah State has a pair of defenders — linebacker David Woodward and edge rusher Tipa Galeai — who could also be drafted, while Utah quarterback Tyler Huntley and offensive lineman Darrin Paulo are possible Day 3 guys. BYU safeties Dayan Ghanwoloku and Austin Lee, as well as running back Ty’Son Williams, are likely free agents candidates. On the FCS front, Weber State defensive end Jonah Williams and Southern Utah offensive lineman Zach Larsen are names to watch for on Day 3, either in the late rounds or free agency.

There are a pair of former Utah high school football players to keep an eye out for as well. Former Corner Canyon High offensive tackle Branden Bowen, who played collegiately at Ohio State, is trying to become the first Charger to reach the NFL. Former Hunter High tight end Noah Togiai, who played at Oregon State, had a strong senior season with the Beavers.

How to tune in