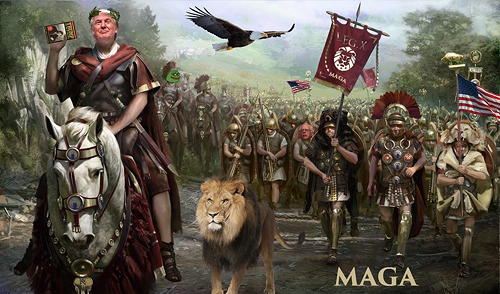 “'The Donald' Is Right!"
By Bill Bonner
SAN MARTIN, ARGENTINA – "Our readers take sides. So does the nation. One side says President Donald Trump is a genius. The other says he is a moron. Our message today: It doesn’t matter; sometimes, even the village idiot speaks the truth. Unlike the mainstream press, we don’t rely on advertisers or the broad public for our daily bread. We’re too rich to need the money and too cranky and arthritic to bend to the latest fads.
We can call ‘em as we see ‘em – sometimes right, sometimes wrong, and always in doubt. But the mainstream media is in a bind. It has to take sides. Viewers want their bugaboos treated seriously… their heroes glorified… and their enemies crucified. And editors and reporters, almost all liberal arts graduates, have their own devils and gods – global warming, diversity, stimulus spending, the failure of capitalism, and so forth.
Preposterous Narrative: But Donald Trump has delusions of his own. So, naturally, they find him boorish, dishonest, and stupid… and they do their best to prove it. That was the underlying motive of the RussiaGate story. If Russia had meddled in the 2016 U.S. presidential election, went the logic of it, then the voters were misled… Donald Trump is an illegitimate president… and Hillary should be president. The narrative was preposterous from the get-go. Hundreds of millions of dollars… and hundreds of millions of hours, too… were spent trying to push voters towards one clown or another. A little more from a wacky Russian oligarch wasn’t going to make much difference.
When that charge fizzled, the mainstream press – Bloomberg, The Washington Post, The New York Times, and CNN – took up whatever story came along, almost always giving it a slant that made Trump look like a moron. Most recently, that story is the COVID-19 pandemic… about which, more below.
First-Hand Opinion: But there was never any need to paint Mr. Trump as a dangerous half-wit. Strutting across the world stage like a demented peacock, Mr. Trump made Sherwin-Williams unnecessary. We’ve never met the man, so we have no first-hand opinion of him. And the liberal media is so hostile, you can’t trust it for an honest judgment. Instead, let’s turn to Mr. Trump’s associates… his family… and the people handpicked by “The Donald” himself, in whose judgment the great man had faith.
We begin with his niece, Mary, a clinical psychologist, who (in her recently released book) says Trump paid someone to take his SATs, has “an undiagnosed learning disability,” and is a “sociopath.” Okay… well… she obviously has some family issues.
How about his sister, Maryanne, a former United States Circuit judge? Quoted by Mary in her book, she said at the start of Trump’s presidential campaign that Donald would never be elected president. Why not? “He’s a clown – this will never happen.”
We asked our research department to look into it. Many people have come and gone, into and out of Trump’s close circle in the White House. What did they say about him? (Excuse the colorful language…) 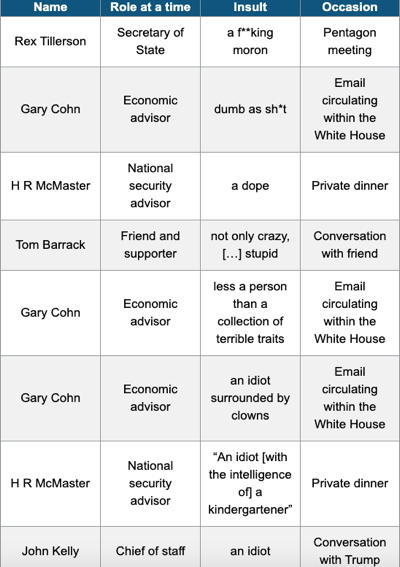 Close Associates’ Opinions: What? He can’t be that bad. Let’s look at what some other close associates have said:
Anthony Scaramucci, former White House communications director: To Trump: “You are a felon and a traitor to the U.S.” Trump is “crazy” and “off the rails,” he adds.
Michael Cohen, his ex-personal lawyer (now a guest of the state): Donald Trump is a “racist,” a “con man,” and a “cheat.” “He asked me to pay off an adult film star with whom he had an affair, and to lie to his wife about it, which I did.”
James Mattis, former Secretary of Defense: Trump “had the understanding of a fifth- or sixth-grader.” The only military man Trump respected was “Colonel Sanders” (of Kentucky Fried Chicken).
Omarosa Onee Manigault Newman, Trump’s highest-ranking Black staffer, says her ex-boss was “unhinged,” and a “racist, misogynist, and bigot.”
Steve Bannon, former chief strategist for Trump, reported that he “was like an 11-year-old child.”
James Comey, former FBI head, said Trump was “untethered to truth.”
John Bolton, former National Security Advisor, said Trump was “almost proud of not learning much about the subject matter of national security.”
Good Ideas Ignored: What insight do we draw from this? What dots can we connect? Only that it helps explain why people don’t listen, even when Mr. Trump has a good idea…
He wants to bring some of the troops home. From Germany and from Afghanistan, for example. At least there he’s on the right track and should be encouraged. America has wasted $7 trillion… and thousands of lives… on its unwinnable “War on Terror.” Instead, “The Swamp” – the insiders and cronies, who live off military contracts, working hand-in-glove with the mainstream media – gin up absurd new threats (a Russian bounty!) in order to justify keeping the troops in place and make the president look dumb (or even traitorous).
He wants to reopen the schools. In light of the evidence about how the coronavirus spreads, there’s no reason the kids shouldn’t go back to their classrooms. But the fact that The Donald proposes it puts almost the entire intelligentsia agin it. On CNN today is a long article about what a terrible idea it is. But buried near the bottom of the pile is this from Dr. Robert Redfield of the Centers for Disease Control and Prevention: "The ability of this virus to cause significant illness in children 'is very, very – very limited.'”
He cautions against tearing down statues. Again, he’s right. Maybe the statues should go. Maybe they should stay. But it’s not for a righteous mob to decide. There are probably other causes he is right about, too. It is a shame he’s such a poor champion for them.
Stay tuned…"
- www.rogueeconomics.com
Back to Feed
Use left/right arrows to navigate the slideshow or swipe left/right if using a mobile device