School or no school? Masks or no masks? Where parents stand on school this fall 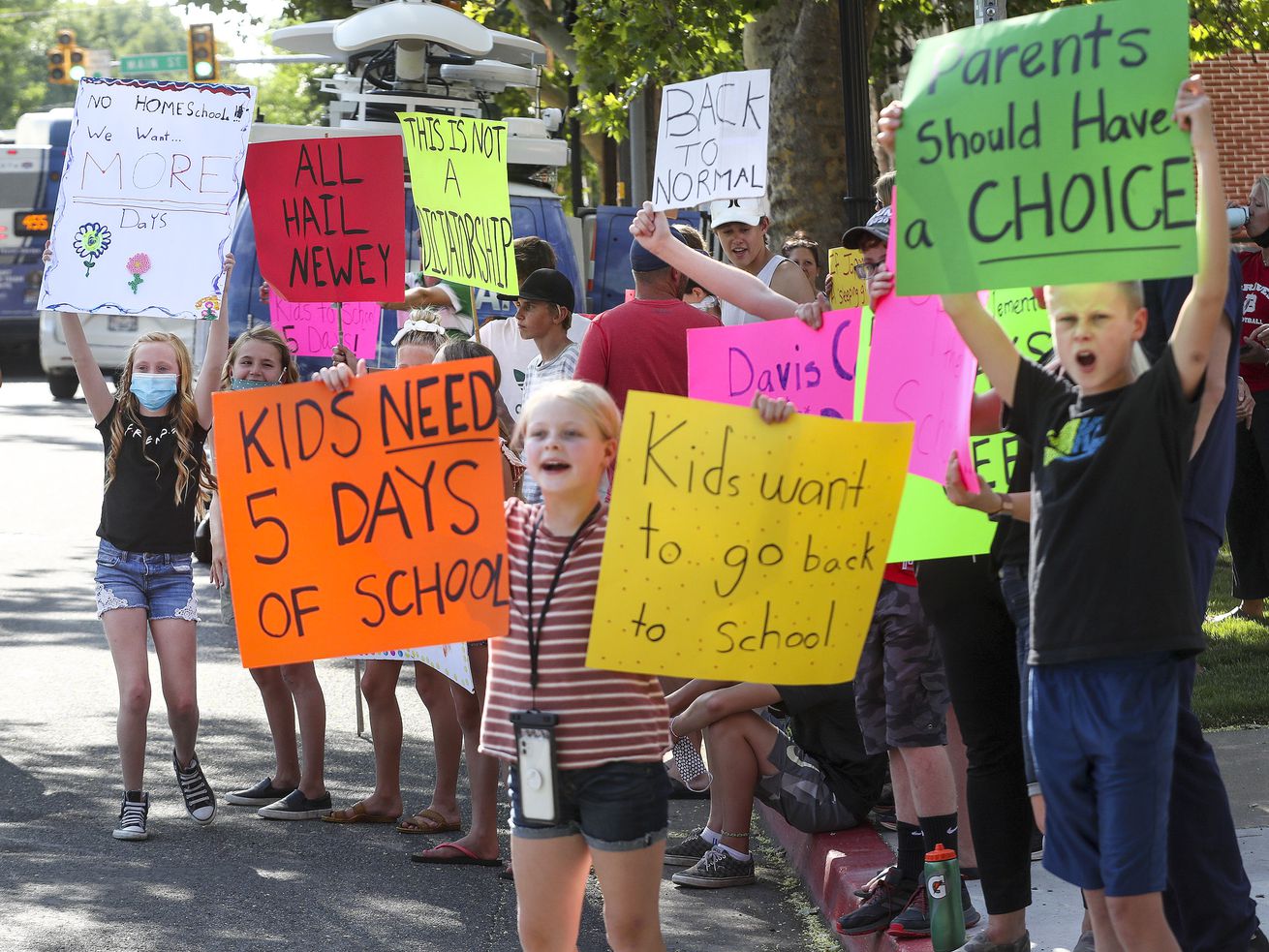 Parents, teachers and students rally outside the Davis School District offices in Farmington prior to a school board meeting on Tuesday, Aug. 4, 2020. Parents and students held signs and voiced their support for an in-person five-day school week. | Steve Griffin, Deseret News

SALT LAKE CITY — Cathy Clark’s four children are excited to go back to school, and she’s ready for them to walk the halls and sit in the classrooms again at Barratt Elementary in American Fork.

“And I personally think they need that,” she said of her fifth grade daughter, twin fourth grade boys and first grade boy. “They need to be with schoolmates and teachers.”

Clark and her husband, JP, are among more than half of Utah parents who plan to send the kids to school as usual this fall — though it will be anything but usual amid a host of new safety protocols because of the coronavirus pandemic.

A new Deseret News/Hinckley Institute of Politics poll found 54% of Utahns intend to have their children in school when the bells start ringing later this month. Another 23% will have them participate remotely via technology, while 9% will teach them at home and 14% aren’t sure what they’re going to do.

Though more than half of parents plan for their children to attend school, less than half think public schools in their local school districts should open for in-person classes in the fall.

The survey found 48% say schools should open, while 31% say they should not. The remaining 21% weren’t sure.

“We’re clearly in a new era when we’ve got 52% of parents who either don’t want to send their children back to school this fall or are unsure about it,” said Mark Peterson, Utah State Board of Education spokesman. “I get that that there’s a lot of uncertainty out there.”

Isaac Beh comes at the issue both as a father of three and as a teacher, and for him the controversial question of reopening schools is a tough one.

He plans to have his senior, sophomore and seventh grader take classes online at home for at least the first couple of weeks. But as an educator, he’ll be in the classroom teaching English as second language and in the gym teaching physical education at Murray High School.

“This is the conundrum. As a parent, I’m going to hold my kids out at first and see how it goes. We’re going to see how many people show up. If there’s large numbers in the school, we’re probably going to have them do online,” he said.

“At the same time, I know that’s not an option for some people. As a teacher, my main concern is the safety and health of my students and the education of my students.”

Beh said he expects most of his ESL students to be in class nearly every day because it’s so difficult to learn the core curriculum and English without being there. Other kids also really need to be in school, he said.

When students, faculty and administrators return to school, they will be required to wear face coverings per a mandate from Gov. Gary Herbert.

The poll shows 62% of Utahns agree with that decision, while 27% disagree and the remainder don’t know.

Clark said she neither agrees nor disagrees with the school mask mandate but her kids will comply. Though she said she’s not concerned about her children getting sick, she has no problem sending her kids to school with masks if that’s what allows them to be there.

Clark said wearing her mask when required helps her children do the same.

Beh said he was relieved when Herbert made masks mandatory in schools. He was dismayed that more than quarter of respondents in the poll disagree with that decision.

“If it wasn’t mandatory, you’d have kids showing up whose parents tell them not to wear a mask. I think there’s people out there who would send their kids to school with a cough,” he said.

It scares Beh that he could get sick and then infect family members or students. He would prefer a COVID-19 vaccine be available before schools reopen.

“There some stuff that can go down here and go really bad and go sideways really quick,” he said.

Independent pollster Scott Rasmussen conducted the survey of 1,000 Utah registered voters from July 27 to Aug. 1 for the Deseret News and the University of Utah’s Hinckley Institute of Politics. It has a margin of error of plus or minus 3.1 percentage points.

The poll showed clear distinctions among respondents who identified themselves as politically conservative, liberal or moderate.

It found 70% of conservatives favor schools opening in the fall, but only 18% of liberals. Moderates were at 35%. The survey also showed 68% of Republican say schools should open, while 62% of Democrats say they should not.

Democrats were also far more inclined to agree with the governor’s school mask mandate than Republicans at 87% to 50%.