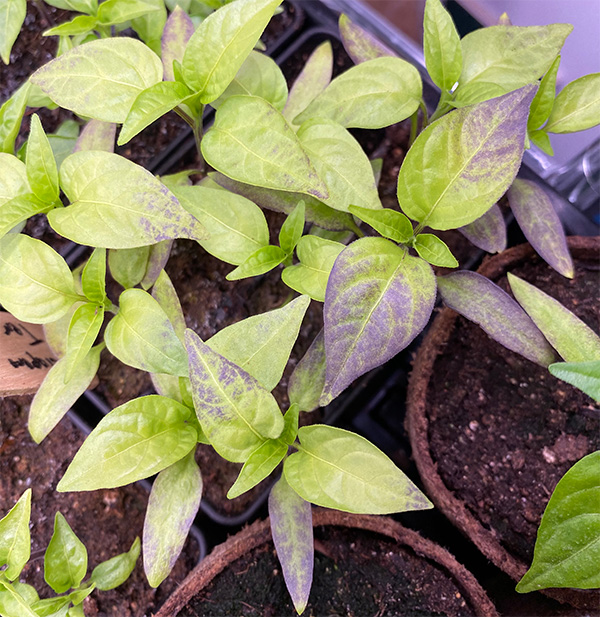 Compared to hot pepper seedlings, newborns and infant babies are almost easy to figure out. My kids both came with different learning curves, but once I knew what I was doing, things were relatively straightforward. This is when they were infants, now’s a completely different story of course.

I’m not ready to throw my hands up in defeat just yet. And to be honest, these were my later starts and will likely be sacrificial plants – easy prey for animal pests, or experimented on for the sake of knowledge and understanding. Still, I’d like to get to the bottom of things.

Some of the plants will also serve as extras, in case the local wildlife eviscerate my plantings as they did most of my sunflowers two years ago.

All of my plants go through comparable watering, fertilizer, and lighting routines. I try not to over-water. I move them when they’re too tall and close to the LED lights. Sometimes I raise the lights. I’ve started giving all the plants fertilizer, or rather water-soluble plant food.

Here’s the distinction that too me some time to learn: plant food is like a large fast food meal, while fertilizer is a grocery bag full of ingredients good for several days worth of meals.

With some jalapeno seedlings, the younger leaves went black and the plants exhibited stunted growth. This didn’t affect all of my hot pepper seedlings, just some of them. Adding nutrients in the form of water-soluble plant food seemed to fix things. Their color improved – new growth was greener in contrast to younger leaves that were yellow or blackened – and I believed that adding nutrients was the fix.

But now some of the leaves are turning black again…

Internet research says that maybe they’re “sunburnt,” and that this can happen in response to LED grow lights indoors. Or, it could be a nutrient deficiency. Maybe they’re being over-watered?

Some of my seedlings are affected. Other batches are not. The only difference I can tell is that different seed starting mixed was used, with seedlings in Espoma or Burpee starting mix seemingly worse for wear.

It’s weird. Some of the slightly affected seedlings are my earlier starts, but one batch is from 4/17. Meanwhile, I have different starts from 4/18 that are doing much better.

Maybe they’re root bound? I potted-up some of the affected seedlings, and they’re doing great now, but they were runts compared to most of the other seedlings I’ve been repotting into larger containers.

I think it comes down to nutrients. While some of the younger seedlings aren’t exhibiting the same symptoms, they were also started on lower strength plant food/fertilize supplements far earlier.

It could be that the seedlings that went longer without nutrients are less healthy? Or more likely, the starting mixes are to blame.

When I pot-up, I use a light potting mix and add in earthworm castings, which is organic matter that provides a slow but steady source of nutrients. It’s a mild organic fertilizer. This is probably why the previously blackened-leaf seedlings have grown larger than seedlings of the same age still in their originally-sized cells.

I have a lot of experimentation to do, and this will hopefully serve as optimizations for seed-starting adventures next year. It’ll be a lot easier now that I know what to focus on, and with a small focus in mind, rather than the race I’ve been on to grow seedlings large enough for transplant outside.

I considered that perhaps I shouldn’t grow my own jalapeno and habanero plants from seed, since they’re available in abundance at local nurseries even given current COVID-19 pandemic circumstances, but the experience has proven to be very educational, and some of my plants look to be doing great so far. Plus, lessons learned allowed me to start a special variety – Sugar Rush Peach – with better results than I would have seen otherwise. Hopefully my success follows through the rest of the season. That variety, and many other hot peppers, aren’t widely available, unlike the 34 different tomato plants the local greenhouse has listed on their website.

There were some complaints that I – please forgive the language – half-assed my seed-starting experiment, and I did. But, upon seeing some of the results, and seeing what’s happening here, that’s how a hypothesis is formed, and a more effective one than if I had practiced “proper” experimentation at the start. Now we know what to test for, we know what the controls should be, and what variables to change. I figure that I’ll start over in the summer, once all my young seedlings are out of the house and planted outside somewhere, given away, or otherwise moved from their current indoors growing area. And, maybe I’ll even be able to start with seeds straight from a jalapeno off one of the current plants.

This is kind of how different projects or hobbies go. You might set out to build dovetails as part of a woodworking project, but no matter how much you read, it’s not until you put chisel to wood that you truly learn the process.

Every plant is different, every indoors seed-starting environment is different. Still, I though that I armed myself with all the background research and information needed to do a great job at growing seedlings strong enough to be planted outdoors. Granted, some of my seedlings are impressively large, at least in my opinion, but sorting all this out will hopefully pay off in my future vegetable-growing efforts.

For now, until someone steers me in a different direction, I’m assuming that the starting mix lacks sufficient nutrients, and that once-a-week water-soluble plant food just isn’t cutting it.

I feel a bit embarrassed at getting “the basics” wrong, and for not understanding what’s going on with some of my plants. But, I also do find comfort in watching some of the earlier videos of some of the hot pepper and gardening YouTubers. There’s one that I like, and while they now add worm castings or other amendments to their seed-starting mixes, that’s not something they’ve done in the past. It’s good to know that everyone stands to learn new things from time to time.

Background research is no substitute for first-hand experience and witnessing how plants respond to different conditions, but it is also very important. For instance, it was crucial for me to have learned that cucumber plants don’t like their roots disturbed, which is why I started them indoors in 4″ pots. The cucumber seedlings are doing great, by the way, except for one variety that has proven to be difficult to germinate. Time will tell whether they thrive outdoors or not.

I didn’t intend to spend so much time on gardening and the like, but with everyone home, there’s a need for something away from my computer, away from my workspace, and that doesn’t involve power tools or other such instruments that I requires distraction-free attention during daylight hours. Plus, I’m looking forward to the process – I never expected myself to be this excited about growing my own vegetables, but I am.

Completely off-topic but tool-related mention of the day: Today’s day was made more enjoyable by the use of Makita’s cordless track saw. Buy Now: via Amazon, via Acme Tools, via Tool Nut (promo ends 5/15/20). I received a test sample a while ago (thank you Makita USA!), and I love using it. I still prefer my corded Festool (purchased at retail) for a lot of things, but the Makita’s cordless functionality is very convenience if I’m working outside. The Festool tops the Makita when it comes to dust collection convenience though. I also used a Milwaukee multi-bit screwdriver, Knipex Pliers Wrench, Channellock adjustable wrench, Dewalt utility knife, Milwaukee scissors, Milwaukee cordless vacuum, and a generic hex key that came with my new hose reel.

Tell us About Your Garden Plans for 2020