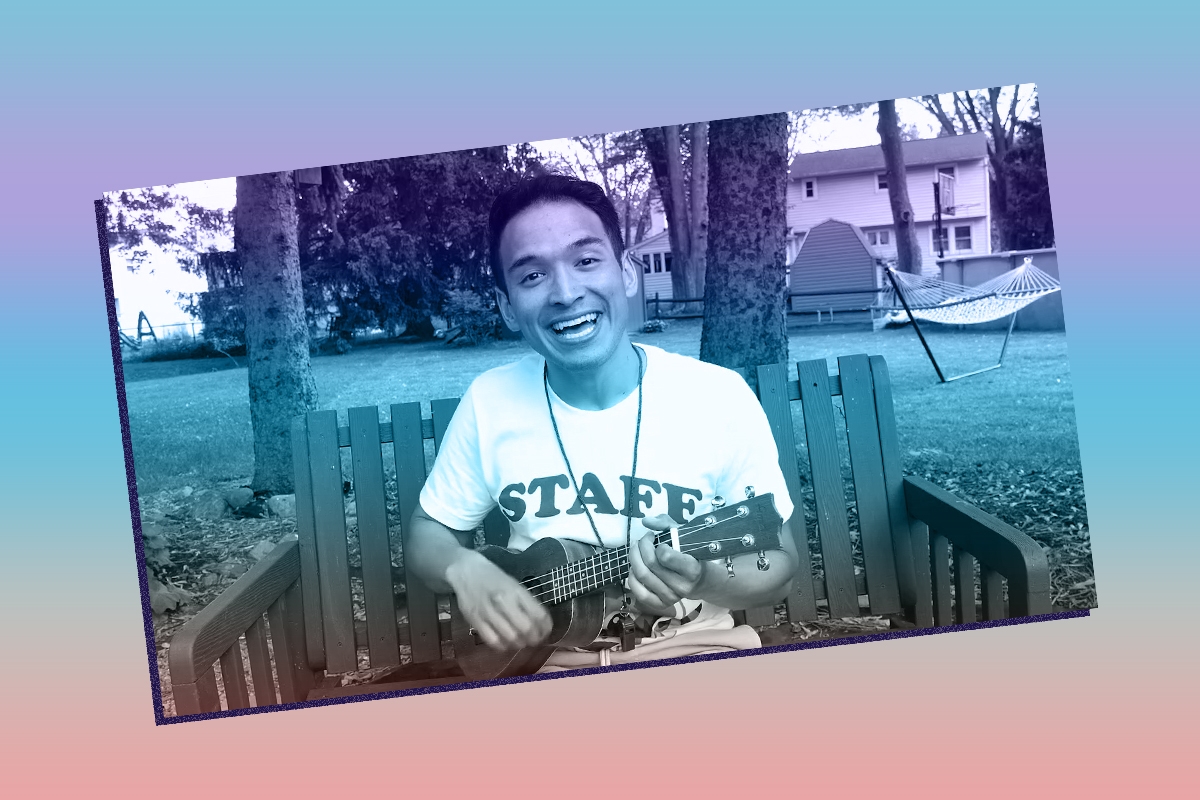 Like all New Yorkers, the Astoria, Queens resident shifted to lockdown mode, and stared down the job uncertainty that many have shared in this unprecedented time. Luckily, however, when New Victory Arts joined forces with Public Television Affiliates, WNET and THIRTEEN reached out to the Bay Area native with an incredible offer: the role of host and “head counselor” on WNET’s new Camp TV initiative.

Airing on Channel Thirteen with a new episode every day from July 13 through August 26, Camp TV brings together a variety of entertaining and interactive experiences to the screen. Each daily episode has a theme, like Crazy Hat Day or Song Day, and features a variety of “activities” like from nature education about owls, cooking, and arts and crafts and skill building. Mostly self-filmed in the participants’ homes, Piser brings infectious exuberance and positive energy to the screen as head counselor, bringing a dose of indoor fun to kids who are missing out on a usual summer due to the pandemic.

I spoke with Piser about what it’s like filming a TV show during a pandemic, activism in the theatre community, and how his intersecting identities influence his work.

How did you get involved with Camp TV? What inspired you to work on this children’s show about camp?

I was so excited. I just felt so bad for children and parents, with school closures and the continuing Covid-19 restrictions. It’s felt like decades that we’ve been in this lockdown, and we are adults. So I can’t even imagine how difficult and confusing and, honestly, scary it must be to grow up as a kid in a time like this. So when I found out, it literally took two sentences. I asked what’s the program going to be and, when I found out the nature of it, that it could bring joy to households nationwide and provide some semblance of a camp routine for kids who are missing out on all those incredible experiences that I grew up with every summer, joining the team was a no brainer.

What was your camp experience like as a kid? Did you go to a Jewish summer camp?

I was a camp fanatic growing up. I mean, I was a super nerd. I loved going to school. I was just obsessed with it — too much so. But I also loved summer break because it meant it was camp season. I did everything from tennis camp to swimming camp… nature camps, even tech camps. It was really anything that I could get my hands on. I’d find [something] and be like, ‘Mom, Dad, can I do this?’ I went to Camp Ramah for one summer in middle school, and had a wonderful experience there. But, yeah, I was totally obsessed with all things camp growing up.

What are some of your favorite memories of camp?

You know, I think I’ve always been such a water boy. I was a swimmer growing up and so any camp that involved a body of water — if it was a lake or a pond or the ocean — I really immediately go there [in my mind]. But even more so, the memories at the forefront of my brain, when I think of the word “camp,” or when I smell like burning firewood, I just immediately think campfire — s’mores and guitars and ukuleles or even spooky stories. There’s just something so special and magical about meeting new people, sitting around a campfire, and enjoying that time together in like complete, peaceful serenity.

How do you feel you Jewish identity, and your n intersecting identities as a queer Asian Jew, play into your career as an actor?

My mom is an immigrant from China and my dad is a Jewish white boy from Indiana. But my mom actually converted before she had me so I am, you know, technically and by the bloodline Jewish. I grew up at Temple Beth Abraham, which is a great congregation in the Bay Area. And I still go back when I visit, when I’m able to. I had a bar mitzvah and my rabbi asks me, if I come back, to read a Torah portion. I’m always jumping back there because it’s really kind of the community that gave me my voice; really it is the first place that I had an opportunity to perform in any sense. But also, a lot of loved ones are still there.

Growing up, it was rare to see someone just purely of Asian descent on the Broadway stage, in mainstream media. Much less someone who was both Asian and Jewish, and perhaps even rarer to find someone Asian, Jewish, and queer. So I think the possibility that I could allow someone who identifies similarly to me — whether they be kids or adults — to feel represented and like they’ve been given a voice in any way, I think any artist would say that is their dream. That brings me, personally, so much joy and pride, the thought of that being a possibility.

How do you think being part of Dear Evan Hansen impacted your view of theater and the kind of the role you can play for audiences?

Before the pandemic, I was playing Evan on matinees on Broadway. And I haven’t had a long career but the shows that I’ve done I feel very grateful to have done every single one of them. And I learned something different from every experience. For Dear Evan Hansen, it’s such a special show. Performing Evan, not only on Broadway but in the premier international production, it’s been such an fulfilling experience. It’s really shown me just how important theater is and can be. The show portrays the true experience of a teenager in the modern technological era, and has really successfully created a discourse around mental health within younger generations, which is amazing.

In the last few months, with the Black Lives Matter movement gaining a lot of traction, there have been a lot of important protests and people speaking out. What role do you see actors playing in this movement? How you see this play out in your own life?

This is sad but true: Similar to almost every other field, if not every other field, racial injustice runs rampant within the Broadway community and national theatre community at large… I think one of the most important jobs of actors and artists is to give a voice to the voiceless, both on and offstage. And right now, it is imperative that we do just that specifically for Black, Indigenous, and People of Color. To be more specific, within our industry, how that can be achieved, it means that everyone needs to be fiercely fighting to create space for BIPOC creatives. You know, directors, producers, actors, composers, designers- any kind of creator needs to be able to have that space.

Outside the theatrical community, I think it is on actors to educate and promote and instigate wider audiences that we are able to reach through performance on to action. Because nothing gets done by just talking about it. It’s so important to talk about it and to show up and to be a part of the conversation, but at the end of the day, everyone needs action.

I’ve been talking with colleagues and friends lately about how my upbringing, and how, both knowingly and unknowingly, my Jewish values of tikkun olam, repairing the world, really affect the role that I want to be taking in these movements. Is that something you find relevant?

One of the things that I personally have been trying to achieve is to make sure that I’m balancing listening actively, and reserving the space for people, for Black, Indigenous and other People of Color, to have that space, but also to make sure that I am not just speaking words. That I’m actually doing something that feels like it is being helpful and is helpful. And I think all of that comes from my background — I mean, I was all about tikkun olam growing up… and I feel that has stayed with me through college and coming into the real world. I feel that very deeply to the core of who I am and my values — that this is a time where Jews, regardless of your religious background, whatever it is, this is a fight that everyone should get in on — that everyone has a responsibility to be a part of.

The pandemic is bringing everyone a lot of challenges. What’s bringing you joy in this difficult time? Have you picked up any new quarantine hobbies?

Honestly, the last month and a half, Camp TV… we have gone straight from the drawing board directly into filming for 20 straight episodes. Doing all the activities with the viewers, and feeling that like invisible, intangible, yet slightly tangible interaction with the kids through the camera has brought me a lot of joy. We actually just finished up shooting our final couple episodes on Sunday, and I have felt restless not being able to have you know, these pre-production meetings and talking about the material and how cool the activities are.

Besides this experience of Camp TV, and being possibly the most exuberant camp counselor that I always dreamt I could be, I’ve been relearning Mandarin. I was able to speak semi-fluently growing up, mostly because my grandparents — that is their first language as it was my mom’s. And so I’ve been trying to re-familiarize myself with that. I’ve been cooking a lot, pretty much if you name any Bon Appetit web recipe I probably have made it in the last five months.

This interview has been condensed and lightly edited.

The post Let This Jewish Broadway Star Be Your Kids’ Camp Counselor This Summer appeared first on Kveller.