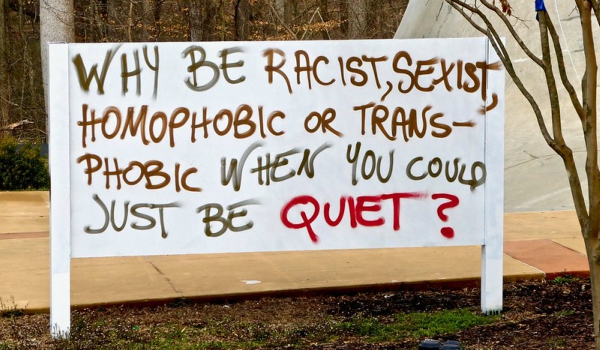 Before you begin with your pearl-clutching outrage over the title of this piece, just stop.

I can already hear the bullshit because we are so maddeningly predictable.

In this case, I can already hear the predictable whining (and a very cheap white whine at that) about how if you substituted the n-word for cracker in this title “that would be racist.” Or how it would cause the piece to be immediately pulled from Medium, and its author flagged for a violation of community standards on Facebook and Twitter, or wherever else it was posted.

It’s the most intoxicating 7th grade logic in the world, right up there with “If we can have a Black History Month why not a White History Month,” and it sounds like this:

What, you never heard “peckerwood” before?

Wait, why are you laughing?

Oh yeah, I know why: because these “slurs” for white people are just that — laughable. Laughable because they’re so juvenile, so silly-sounding, and so incredibly ineffectual. Oh, and they are tied to absolutely no history of anti-white oppression or even the faintest inkling of power that could fuel such abuse.

They sound ridiculous and feeble in ways that the n-word deployed against black folks does not. They may not be kind, and it may be best not to use them (and outside of pieces like this where I’m trying to make a particular point, I don’t use them), but to think of them as racist, and especially equivalent to the slur used against black people as they were being strung from trees is an obscenity.

Because history is a thing, and it imbues language with meaning and context. And the history of the n-word and other slurs against people of color is a history of more than hurt feelings — the kind some white folks apparently get whenever we talk about racism or point out that institutional white supremacy has been the norm throughout the life of America.

Or even when we simply use the phrase “white people,” or “white folks,” as if merely saying white were racist. Because seriously, I hear that one all the time.

Which is hilarious because it was we who came up with that word to describe ourselves. But now if others use it, or even if white folks do, but in a context that isn’t flattering — isn’t about how great we are — we lose our minds and call out the reverse racism police.

Don’t get me wrong. I’m not like a lot of folks who say people of color can’t be racist against whites. I think they can be, and some are, at least at the level of ideology and belief. Racism, after all, is an “ism,” and as such it — like other isms, such as capitalism, communism, fascism — is a worldview. And anyone can adhere to that worldview. But like those other isms, it’s also a system. And at the systemic level, people of color can almost never be racist because they so rarely exercise real institutional power.

Even when people of color have positions of power, there isn’t much they can do to white folks and expect to get away with it. Black cops can’t get away with racially profiling whites for drunk driving (even though we do it most often), or just randomly stopping and harassing white youth for no damned reason in the ‘burbs. And those are black folks who have guns and a badge and the authority of the state behind them.

Even Barack Obama — who for a while there was arguably the most powerful person on the planet — couldn’t have done anything to hurt white folks, even had he been so inclined. Oh sure, some accused him of it.

They said his real plan was to put whites in slavery, like this moron:

Or they insisted he hated white people because he dared criticize a white cop who wrongly arrested Harvard professor Henry Louis Gates in his own home.

Some even said the small tax on tanning salon visits included in health care reform legislation was a racist swipe at whites since presumably only whites go to such places. But seriously?

What could Obama really have done to white people? He relied on a decent chunk of us to get elected, and without at least 37 percent of white voters, he never could have been. He even distanced himself from Rev. Jeremiah Wright (who told the truth about the history of U.S. foreign policy as well as racism), just to make sure enough of us would be comfortable with him as president. He ran away from discussing race and racism faster than Usain Bolt used to run away from his competitors. Because to do anything else would have sunk him.

Which is to say that even the most powerful black man in this country’s history still didn’t really have the power.

Think of it like this. Even if we agree that anti-white language and attitudes are indeed racist, they are basically the racial equivalent of a stationary combustion engine. I mean, it’s an engine. But it’s not going to get you very far absent a fuel source — i.e., power — to make it function. On the other hand, racism against people of color has historically had power behind it and still does. The power to academically track kids in school irrespective of actual ability, disproportionately discipline them (despite similar rule infraction rates), profile them, stop and frisk them, or discriminate against them in housing even when the persons of color are equally qualified for loans, or equally qualified to rent, without much consequence.

So while all racism may be equally wrong morally, it simply isn’t the same practically. Not by a long shot.

And I know, I know. What about violence? That’s the retort from white reactionaries. What about black people who commit crimes against white people?

First, most such crimes are not motivated by racism. Robbery, for instance — one of the most prevalent “black-on-white” crimes — is driven by financial impulses. Robbers want stuff. They aren’t trying to pay back whitey for slavery by holding up a liquor store that happens to be owned by a white person.

And generally, when black folks commit crimes against white folks it’s likely for the simple reason that they know white folks are less likely to be able to identify them. Because of our spatial isolation from black communities, we aren’t used to seeing and discerning black faces very often, which means our cross-racial identifications will be notoriously bad.

Even beyond that, if the only power you have over someone is the power to attack them violently, that is not real power. Such actions are illegal and will expose the perp to arrest prosecution and incarceration. Truly powerful people don’t have to put themselves outside the bounds of the law to exercise their “racism,” or risk going to jail for it. Power is being able to mistreat people and know that you will suffer no criminal penalty, as with the examples I mentioned before: tracking, profiling, or telling prospective black renters that there “are no apartments available” even when there are. Even employers who discriminate never go to jail, and only pay small fines typically, presuming they get caught (which is rare).

The bottom line is this: racism as a practical matter — as something that fundamentally marginalizes people because of their membership in a particular racial group — has been a one-way street in this country. To believe otherwise is to think that “reverse racism” can be a thing worth losing sleep over, and yet so utterly ineffectual that the victims of it somehow manage to retain 10 to 14 to 20 to over 400 times the wealth of those who perpetrate it (depending on how we calculate the numbers) while remaining half as likely to be out of work and only 40 percent as likely to be poor.

If that’s what it’s like to be the victim of racism, I’d bet there are some black folks who would really like to experience that version of it for a while.

If you believe in the work we are doing here at The Good Men Project and want to join our calls, please join us as a Premium Member, today.