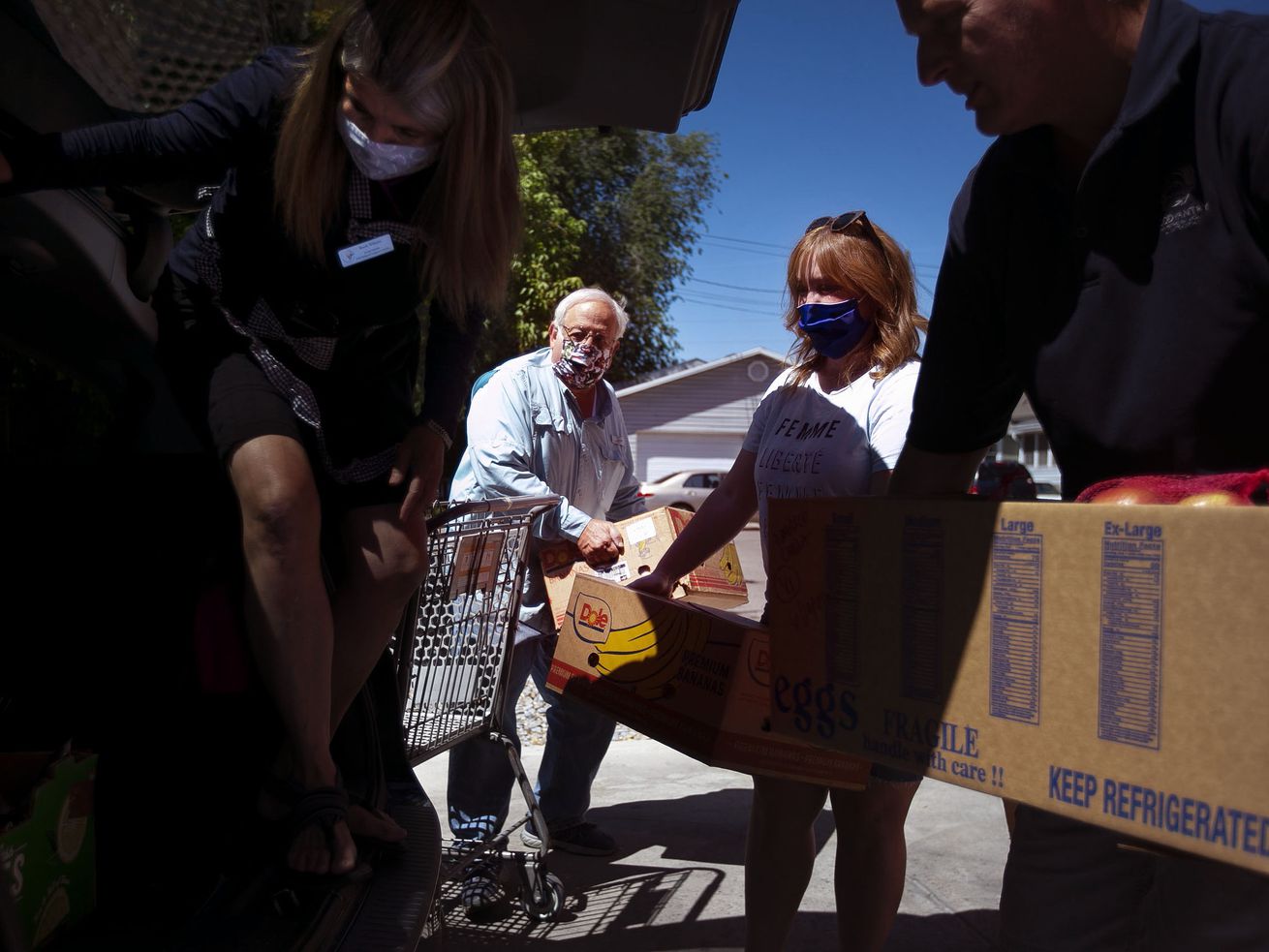 Randy Williams, a member of the Cache Refugee and Immigrant Connection board, left, volunteer Bruce Haslem, Jess Lucero, another board member, and Matt Whitaker, director of the Cache Community Food Pantry, load a car with food donations at the pantry in Logan on Thursday, June 11, 2020. Nonprofits, state and local government and churches have teamed up to assist refugees in northern Utah who work at a meatpacking plant in Hyrum, Cache County, and have tested positive for COVID-19. The recent rise in cases statewide is attributed to the outbreak at JBS where many refugees and immigrants work. | Laura Seitz, Deseret News

Volunteers asking: ‘How can we be good neighbors to each other?’

LOGAN — The Centers for Disease Control and Prevention is dispatching public health workers to help respond to a COVID-19 outbreak in Cache County where hundreds employed at a meatpackaging plant tested positive for the virus.

The backup comes as churches, advocates and volunteers gather food and hygiene supplies for those infected in Cache County, many of them refugees and immigrants who work at the JBS beef packing plant in Hyrum.

JBS corporate spokeswoman Nikki Richardson said some 1,400 employees work at the plant and most underwent mandatory testing on May 30 and June 2. According to health authorities, 287 workers tested positive for the virus.

At the same time, county leaders are seeking the governor’s approval to loosen virus-related restrictions and move into a “green” or “new normal” phase ahead of the rest of the state as a whole. For the time being, most of Utah will remain in the “yellow” phase, Gov. Gary Herbert said Thursday.

On May 29, state health officials reported only 156 COVID-19 cases in the Bear River region, which includes Box Elder, Cache and Rich counties. By Monday, June 8, there were 767 cases.

On Friday, the region reported 927 cases — a nearly 500% increase in two weeks — as well as 30 hospitalizations and two deaths.

Seven incoming disease specialists will be welcome relief to employees who pulled 18-hour days last week, said Josh Greer, spokesman for the Bear River Health Department. The reinforcements include an expert on helping employers navigate precautions for essential workers, and others specializing in certain languages and in coordinating with testing labs.

Last week, as public health workers in Logan tried to trace and contain the spread, it pulled in around 20 reinforcements, including nurses and others, to help its handful of disease specialists. But even with the boost in staff, they worked from 5 a.m. to 10 p.m. or 11 p.m. for the first week of June, Greer said, getting in touch daily with those who fell ill and notifying those around them who were potentially exposed.

“They’d go home and sleep for six hours and be back,” Greer said. “It was a madhouse.”

The CDC relief workers coming from different parts of the country are set to stay for six weeks.

According to a statement from the Utah Department of Health’s Refugee Health Program, it is working closely with local public health authorities, the state Refugee Services Office and nonprofit agencies in Logan to provide health education services and materials that are linguistically and culturally appropriate.

The program also assists with case investigations and contact tracing for refugee cases as a part of the general state plan.

The sharp increase in COVID-19 cases is not just a concern for state-level public health officials. It was a distress call to churches, nonprofit agencies and volunteers who serve hundreds of refugees and immigrants who live in the Cache Valley, many of whom work in area production and processing plants.

Those who tested positive were suddenly out of work and attempting to find safe ways to isolate themselves from family members, although that’s easier said than done in large households.

People who speak English as a second language and are unfamiliar with government or other systems struggle under ordinary circumstances.

“Where there’s so much health information and it changes rapidly, native English speakers are having trouble interpreting it all. That’s where those challenges kind of pile up,” said Jess Lucero, board president of the nonprofit Cache Refugee and Immigrant Connection.

Food and hygiene supplies are being delivered to refugee and immigrant households through a network of nonprofit organizations, churches and volunteers. They are also helping them navigate health care facilities and government agencies that can assist them.

Immigrants and refugees are experiencing a great deal of “uneasiness, a lot of fear and a lot of uncertainty,” said Lucero, who is an associate professor of social work at Utah State University.

The community’s approach has been to help with basic needs quickly, guided by this premise: “How can we be good neighbors to each other?”

Under the best of circumstances, immigrants and refugees are vulnerable because they have modest incomes and little savings to tide them over in times of emergency.

Many families live in multigenerational households, which means there are greater needs for food and no place to go if someone needs to quarantine, although Utah State University made available a dormitory for that purpose, Lucero said.

“We started helping with the food because we really saw that it was the most urgent need right now to make sure that they are not scared that their babies are not going to have food ...” — Marisol Montufar, of the Church of God in Hyrum.

The families’ needs are profound and extensive. The small congregation has provided food to families from Franklin, Idaho, to Brigham City. Only about 10% of the recipients are connected to the church, Marisol Montufar said.

“A lot of the families have told us that they go paycheck to paycheck. They don’t have a savings they are able to use. That’s why we started helping with the food because we really saw that it was the most urgent need right now to make sure that they are not scared that their babies are not going to have food or anything like that,” said Montufar, whose husband, Francisco, is the pastor of the church.

Food is the most immediate need and the church’s efforts have been supplemented by the recent donation of a refrigerator and freezer, which will enable it to stock a greater variety of food. But families are also asking for help with rent and other bills, Montufar said.

Lizette Cruz with the Logan-based nonprofit Family Place is also coordinating an effort to help bring aid to families of those out of work. She said many are receiving short-term disability pay of $50 a day, but that’s a tiny slice of the overtime pay they typically bring home. Several have reported they were told to work while sick or waiting for test results that ultimately came back positive.

Cruz said she believes the company “took all the precautions possible” at the plant, requiring masks, shields and sanitizing stations, but the safeguards were no match for delays in test results, including for those who were infected but continued to work because they developed no symptoms.

Cruz said the sentiment among Latino workers at the plant could be described in a single word: hopelessness.

“They just feel they can’t do anything. They’re scared to go back to work, because they’re maybe going to go and come back and get their kids sick,” she said. Many have long refused the sort of assistance Cruz provides, preferring instead to push through on their own.

Meanwhile, local officials have determined they do, in fact, have the power to close the Hyrum operation of the world’s largest meat processor, JBS, if necessary.

Meat plants are being kept open under an April executive order from President Donald Trump that invoked the Defense Production Act amid fears of shortages, a move critics say jeopardized workers’ safety.

Cache County Attorney James Swink said Friday his office has determined the president’s executive order may be unenforceable since meat isn’t essential to national defense. Moreover, Utah law gives local health officials the authority to shut down business at the plant if necessary, he said.

The local health agency for now is opting to work with JBS and other meatpacking plants in the region to ensure they are complying with CDC guidelines for essential businesses, an effort the out-of-state workers will work on.

“If things get out of hand, we’ll have to cross that bridge of opposing the president’s order,” Swink said, a decision that ultimately lies with a mix of nine elected and appointed officials on the health department’s board. Swink is a member of the board, according to its website.

Federal agriculture regulators oversee meatpacking plants. And while the CDC has issued guidelines for the essential operations, federal workplace safety regulators have not put in place any rules amid the virus.

Richardson said JBS is coordinating with the local health department and public health officials to determine the best ways to prevent the spread of COVID-19 and keep the virus out of the facility.

The plant is regulated by several entities, including but not limited to the Department of Agriculture, the Food and Drug Administration, the Environmental Protection Agency and the Department of Labor, she said.

“We will not operate a facility if we do not believe it is safe. We coordinate closely with local, state and federal officials to determine the best ways to keep our team members and our communities safe as we collectively navigate this global pandemic,” Richardson said.