Book Review: At Her Command

by admin June 17, 2020
Don't let the lack of reviews lately fool you, I've been reading up a storm. I'm going to try to space my reviews out a bit though, because I have a ton of cute pictures of the kids to post as of late, so we'll see.
I did finish this one about a week ago but today is review day, so let's chat.
At Her Command - Joey W. Hill 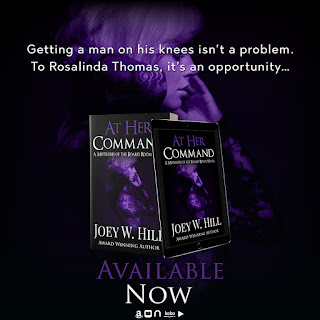 Ros doesn’t accept excuses for falling short. Particularly not from herself. As CEO of a successful New Orleans marketing firm, she knows how to bring quality to the top. The same way she knows how to get it from the men who serve her in the bedroom.
Lawrence has been a SEAL since his teens. He doesn’t know how to be a civilian. So when being a SEAL is no longer an option for him, he accepts a security job at.
Thomas Rose Associates to keep his edge. But from the moment he sees Rosalinda, his deep need to serve gets redefined.
He’s never belonged to a Mistress. Ros is about to change that.

I am going to tell you the only reason I picked this one for review is because I can't honestly tell you when the last time I've read a BDSM novel with a female as the dominate figure. Truly- when was the last time you have? It's not unheard of, but it definitely isn't the norm. I went into this thinking I was going to love it just as much as I would if the male role was reversed and you know what?
Not the case.
I didn't love this one but I learned that I actually do have a preference and apparently that makes me a sub. Which, alright, I guess.
My other issue was I just couldn't drum up any interest for Ros, she came off as a little too much for my taste. It wasn't sexy or enticing at all, and I couldn't find it believable. I also did love our guy, Lawrence. I think it was the name because all I could think of was Larry the Cable Guy but with a full shirt on. AND THEN, he was short. Not short but definitely not 6 foot or more. I'm 5'3 and he might not be much taller than me. And that I can't get into, I don't know. So I already felt a little let down and like this was an uphill climb.
This one begins with Ros needing security (she doesn't think so and is kind of convinced after a conversation and then it turns out YES, she needs it) and Lawrence is the guy. He's got a military background (liked that) and he "needs purpose" so hey, let's make him a sub. The premise was a little far fetched for me and I think this might be completely on me for not really understanding the purpose of a BDSM relationship and how it can fulfill someone.
At best I can give this one a 3 and I think the majority of my waning interest was just not feeling any kind of connection with our main characters. The sexy scenes were good, some a little more drawn out than I'd like, but overall were fine. Was this enough to bring me in for book two? I'd have to say no. I think I've learned that in a BDSM book I really prefer the male to be the domme, and don't come at me feminist movement.
So while this wasn't a hit for me, if you're looking for something that is basically a unicorn in the land of romance novels, this is something to really consider. Of the people I know who have already read this, I feel like I'm maybe the only one not loving it. The reasons I didn't love it might be the reason you're going to love it, so take that into consideration.
A huge thank you to Social Butterfly PR for having me on this tour and sending me an ARC for review!
I want to know if you've read, or would read, a book with the woman in the dominant role, and if you have, which one? Have you read others by Joey W. Hill? I definitely want to try another!
This post contains affiliate links.
Back to Feed
Use left/right arrows to navigate the slideshow or swipe left/right if using a mobile device